After Election Day, access to marijuana likely to reach all-time high across nation

California voters will decide Nov. 8 whether to legalize marijuana for recreational use. Many pot farmers have yearned for the legitimacy and respectability of legalization. But they also fear Proposition 64 could put them out of business. (Oct. 27) AP

DENVER — Nearly 60 million Americans may wake up Nov. 9 to find voters in their states have abolished long-standing marijuana prohibitions, a three-fold expansion for legal cannabis across the country.

California, experts say, will likely play the most significant role in cannabis legalization on Nov. 8. Voters in our most populous state are widely expected to approve the “Adult Use of Marijuana Act,” adding nearly 40 million names to the list of people who live in a state with legal pot.

Lawmakers see marijuana taxes as a source of new revenue to close budget gaps, while entrepreneurs are considering the business case, with potentially billions of dollars in profits possible from this fast-growing Made-In-America industry.

Arizona, California, Maine, Massachusetts and Nevada are considering legalizing recreational marijuana. Voters in Arkansas, Florida, Montana and North Dakota are asking voters whether to permit medical use for certain conditions, like cancer or chronic pain. None of those votes will change the federal ban on marijuana use, although legalization advocates say it may further pressure Congress, the DEA and the FDA to act.

STORY FROM BANK OF AMERICA

Four states — Colorado, Oregon, Washington and Alaska, plus the District of Columbia — have already legalized recreational marijuana. Another 25 permit medical use. But this election has the potential to dramatically shift the conversation because so many Americans live in the nine states where relaxation measures are being considered. If it were its own country, California alone would have the world’s sixth-largest economy, and what happens there almost inevitably spreads east.

Polls nationally show growing support for marijuana legalization. A poll released earlier this month by the Pew Research Center found 57% of adults think marijuana use should be legal, up from 53% last year and 32% in 2006. That despite the fact that marijuana remains a Schedule 1 controlled substance and is illegal at the federal level. A Gallup poll released Oct. 19 showed even stronger support: 60%, up from 58% last year and 50% in 2011.

“There’s been an enormous shift in public opinion on this issue, and I think that has directly led to why it is appearing on so many state’s (ballots) this year,” said John Kagia, executive vice president of industry analytics for New Frontier Data. “This is going to be an enormous industry, no matter how you slice it.” 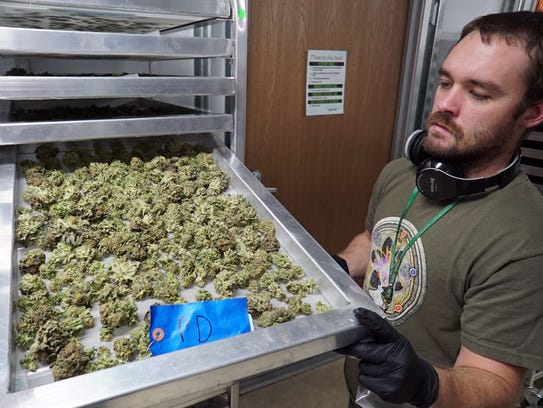 Critics say there’s insufficient evidence to back the health claims made by medical marijuana supporters. They worry widespread legalization opens the door to Big Tobacco-style companies interested in selling drugs to the public, especially kids, without regard for the public health consequences.

New Frontier, which doesn’t take a position on legalization, estimates the legal cannabis market could be worth nearly $8 billion extra by 2020.

Still, and particularly in California, entrepreneurs are rushing to fund greenhouses, invest in growing and harvesting technology and create social media platforms to connect buyers with cannabis recommendations. Those investments are targeted at medical marijuana, which is already legal, but the rush shows how investors are positioning themselves for what’s widely considered a slam-dunk recreational legalization vote in California.

“People are beginning to understand that this isn’t just about not putting people in prison, but about making a lot of money,” said Jeffrey Zinsmeister, the executive vice president of the anti-legalization group Smart Approaches to Marijuana, which has funded opposition campaigns in several states. 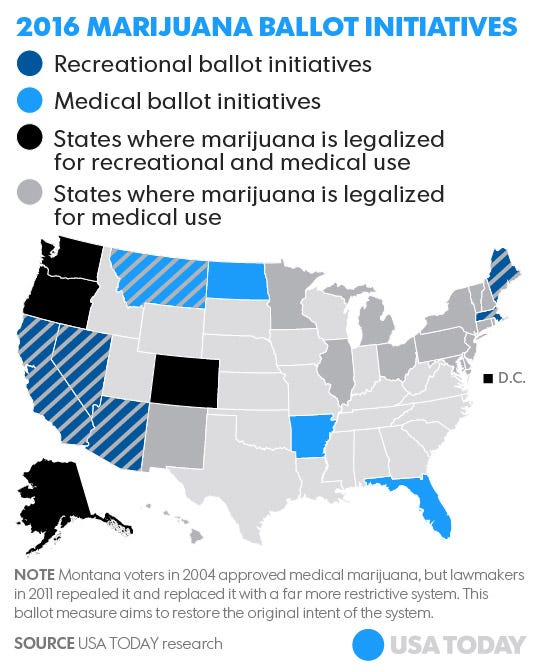 Prop. 205 would legalize adult recreational marijuana use, cultivation and sales, with a 15% sales tax to fund new state regulation, enforcement and education efforts. A recent Arizona Republic/Morrison/Cronkite News poll found 50% of registered voters favor legalization, 40% oppose it and 10% were undecided. The poll surveyed 784 registered voters between Aug. 17 and Aug. 31, with a margin of error of 3.4 percentage points.

Since that poll, however, voters have been bombarded with ads. Polling expert Mike O’Neil said he expects the “No on Prop 205″ ads will draw undecided voters to their side.

“At a very simplistic level, it’s ‘Drugs are bad’ against ‘Gee, we’re overkill with respect to marijuana,’ ” O’Neil said. “Anytime you’re proposing something new, it’s easy to scare people, and when in doubt … (people) just vote no.”

The California plan, known as the Adult Use of Marijuana Act, allows residents to grow up to six plants at home and gives municipalities the power to allow or ban outdoor grows and marijuana stores. It requires commercial growers to comply with environmental regulations — many illegal growers today ignore laws governing water, pesticide and fertilizer use — and gives existing medical-marijuana providers a head start in getting business licenses.

The measure also maintains existing prohibitions on youth use and driving while high. Critics worry it will open up television advertising to marijuana companies and goes too far in permitting people previously convicted of violent drug offenses to join the industry. Medical marijuana is widely available in California, and a large portion of the economies of Humboldt County and the far northern portions of California are heavily dependent on illegal growing.

“AUMA is not the best initiative, but it’s way better than the status quo,” said Lanny Swerdlow, a registered nurse and director of the Palm Springs-based Marijuana Anti-Prohibition Project. “It’s a template, something to build on.” 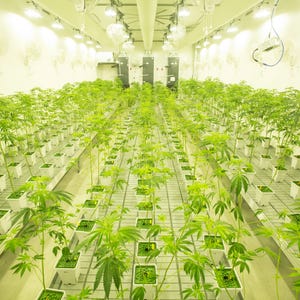 The ballot measure expands the state’s well-regarded medical marijuana program to recreational use, but it also permits the creation of “marijuana social clubs,” where people would be able to consume marijuana. Critics worry that might increase the amount of impaired driving, in the way that bars can lead to more drunken drivers on the road.

There’s also concern that the measure requires marijuana-focused publications to be sold from behind store counters, a proposal that was struck down as unconstitutional in Colorado. Gov. Paul LePage signed Maine’s medical marijuana law in 2011, but he opposes this recreational legalization effort.

Most of the state’s political establishment opposes the measure to legalize recreational marijuana, with former governor Bill Weld one notable exception. Weld, a Republican, is running on the Libertarian presidential ticket with Gary Johnson.

Current Gov. Charlie Baker argues legalizing marijuana in the Bay State could increase youth use and distract regulators and public health officials wrestling with an epidemic of opioid abuse and overdoses. Despite that top-level opposition, voters appear poised to approve the measure: Fifty-five percent of likely voters now say they favor legalization for recreation, WBUR radio reported. That poll found that half the people surveyed had tried marijuana at some point in their lives.

A year after its medical-marijuana program launched, Nevada’s voters are now considering whether to legalize recreational growing and use. Nevada’s program would be open to anyone visiting the state, and supporters say the tourist-heavy market could be worth $390 million, with up to $1.1 billion in economic impact.

Medical dispensaries would be granted an 18-month monopoly on recreational sales, and alcohol distributors would also have an 18-month monopoly on distribution. Home growing would be banned anywhere within 25 miles of a licensed dispensary, which could make home cultivation illegal for up to 90% of the state. The latest polling showed more than 55% of people approved of the measure.

Critics complain that the ballot measure was largely written and funded by those who stand to benefit the most from legalization.

“What we have in Nevada are people who are offering this initiative are exactly analogous to somebody from Phillip Morris writing the tobacco laws for the state of Nevada,” said Jim Hartman, the president of Nevadans for Responsible Drug Policy.

Arkansas voters in 2012 nearly legalized medical marijuana, rejecting the measure 51% to 49%, and this year they’re considering two competing measures, both of which are opposed by the state’s Republican-dominated political establishment. As in many states, Arkansas voters who are personally familiar with medical marijuana use are more likely to support legalization, especially if they have experience with people who have struggled with opioid use or abuse.

“I have a cousin who suffers from Lupus,” said Deb Sanders, a grandmother from Mountain Home who supports legalization. “She smoked some marijuana. She said she could not believe how much better she felt … She’s been able to get off some of her synthetic medications.”

Florida’s proposed Amendment 2 would allow patients to obtain marijuana if they have “debilitating” illnesses, such as cancer, HIV, post-traumatic stress disorder, Parkinson’s disease and epilepsy. Under existing state law, only patients with certain medical conditions that benefit from non-euphoric strains of cannabis and patients with irreversible “terminal” illness may access the drug through state-approved doctors and growers.

A proposal in 2014 to broadly legalize medical marijuana won nearly 58% of the vote but fell short of the required 60% needed for adoption. Polls indicate the measure may have enough support this time around.

“Most of the polls, in most of the states, most of the time, show more people in favor than against, but in none of the states are the margins so significant that we feel comfortable,” said Ethan Nadelmann, the executive director of the Drug Policy Alliance, an advocacy group backing marijuana legalization throughout the country. “And there’s opposition money that’s starting to emerge.”

Florida attorney John Morgan has kicked in about $3 million in support of Amendment 2 this year. Las Vegas casino mogul Sheldon Adelson spent $5.5 million to oppose medical marijuana two years ago and has, so far, contributed $1.5 million to oppose the 2016 effort.

This may be the second time voters here approve a medical marijuana plan. They approved one in 2004, but lawmakers in 2011 repealed it and replaced it with a far more restrictive system — a move that was upheld by the Montana Supreme Court earlier this year.

Now, Initiative 183 aims to restore much of the original system, including allowing providers to hire employees to cultivate, dispense and transport medical marijuana. The initiative also repeals the requirement that physicians who provide certifications for 25 or more patients annually be referred to the board of medical examiners, and bars law enforcement from making unannounced inspections of medical marijuana facilities.

North Dakotans are considering permitting medical marijuana for certain conditions, such as cancer or PTSD. Acknowledging the state’s rural nature, patients who live more than 40 miles from a “compassionate care center” would be allowed to grow up to eight plants as long as they notified local law enforcement in advance. 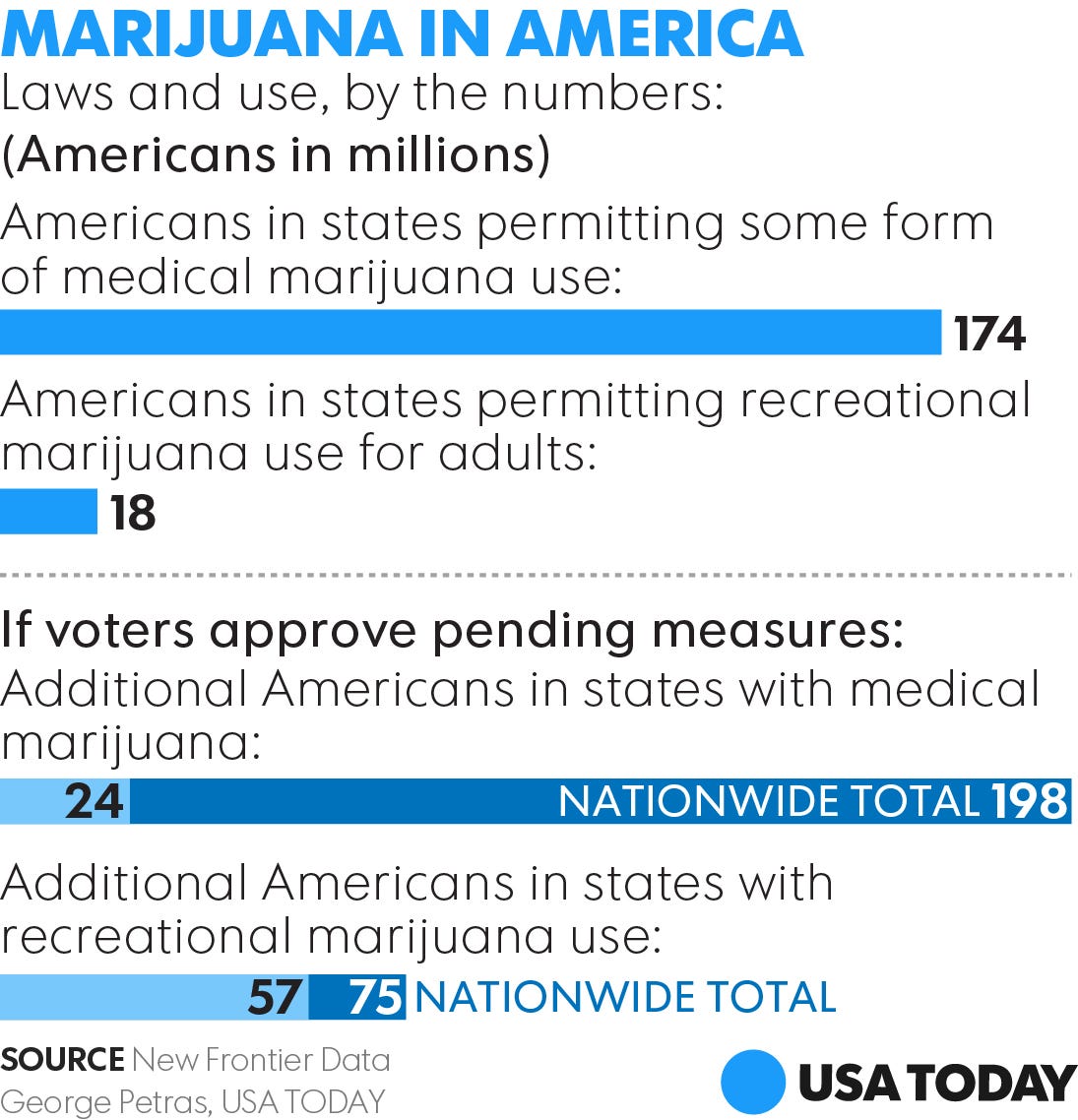